The Ox And The Frog 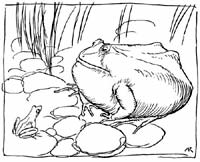 wo little Frogs were playing about at the edge of a pool when an Ox came down to the water to drink, and by accident trod on one of them and crushed the life out of him.

When the old Frog missed him, she asked his brother where he was.

"He is dead, mother," said the little Frog; "an enormous big creature with four legs came to our pool this morning and trampled him down in the mud."

"Enormous, was he? Was he as big as this?" said the Frog, puffing herself out to look as big as possible.

The Frog puffed herself out still more. "Was he as big as this?" said she.

And yet again she puffed and puffed herself out till she was almost as round as a ball.


Copyright © 1999-2019 ChristiansUnite.com. All rights reserved.
Please send your questions, comments, or bug reports to the